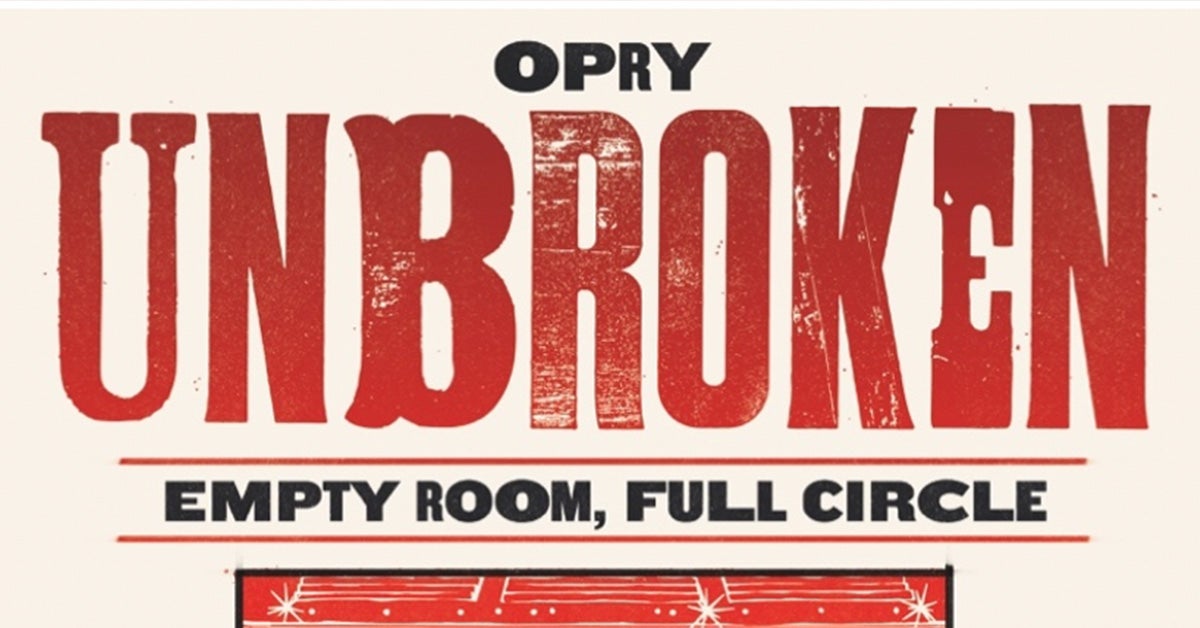 The Grand Ole Opry has announced the release of a limited-edition vinyl LP titled, Unbroken | Empty Room, Full Circle. The announcement comes on the anniversary of the Opry’s decision to pause in-house audiences in March 2020 as a result of the COVID-19 pandemic.

Available for pre-sale May 22,2021 and on sale June 4, 2021, exclusively on Opry.com and at the Opry’s Nashville-based retail outlets,  the LP includes memorable performances recorded live from the Opry stage in front of an empty house. For 29 weeks, Saturday night Opry shows continued uninterrupted despite public health orders that temporarily shuttered many other live productions. These performances were made possible because of the devotion of Grand Ole Opry members, featured performers, Opry staff and local health officials who safely worked together to bring comfort to millions around the world. The Opry continued broadcasting through its weekly WSM radio broadcast and launched the Opry Live television broadcast, which was viewed by more than 50 million people from more than 100 countries during the 29-week period.

“The performances featured on this album brought people together at a time in which they were otherwise largely separated,” said Dan Rogers, executive producer of the album and the Opry. “As a collection, they to me represent some of the most remarkable music made during what I believe will be looked on as a most pivotal time in Opry history.”

Opry members and special guest artists included on Unbroken | Empty Room, Full Circle represent some of the most influential artists in music, having together amassed a total of 81 Grammy® Awards and 238 nominations. The first 2,000 vinyl sold will include a special-edition album-sized Hatch Show Print commemorating the release.

Opry member Marty Stuart leads off the collection with “No Hard Time Blues” from the Opry’s March 21, 2020 show. That night, Stuart said of the Opry’s streak of keeping the music playing on Saturday nights for over nine-decades: “Country music is no stranger to hard times. The Grand Ole Opry is no stranger to hard times, either. It’s 94 years old [now 95] and has been through world wars, catastrophes, and presidential assassinations, but somehow the show has just gone right along and never gone off the air.”

Stuart’s fellow Opry members Vince Gill and Brad Paisley can also be heard on the opening track, with each also appearing on another track on the project. Gill reminded the world that night, “We are at our best during hard times,” while Paisley added, “Country music really excels in times like this. …We will persevere in the face of this.” For the 29 weeks without a live in-house audience more than 60 artists took to the Opry stage for historic and memorable performances including those included in the special Unbroken project.

The Opry welcomed a limited capacity audience for its Opry’s 95th Anniversary celebration on October 3, 2020 and currently hosts limited audiences at its Tuesday, Friday, and Saturday night shows. The Opry, the world’s longest-running radio show, will mark a historic, record-breaking milestone with its 5,000th Saturday night broadcast on October 30, 2021.

Click HERE for a sizzle reel of highlights of just some of the Opry members and special guests who stepped in to the circle to help the keep the music playing at the Grand Ole Opry since the in-house audience shows were paused on March 14, 2020.

2.Reba McEntire "Back To God"

9.Darius Rucker "It Won’t Be Like This For Long"