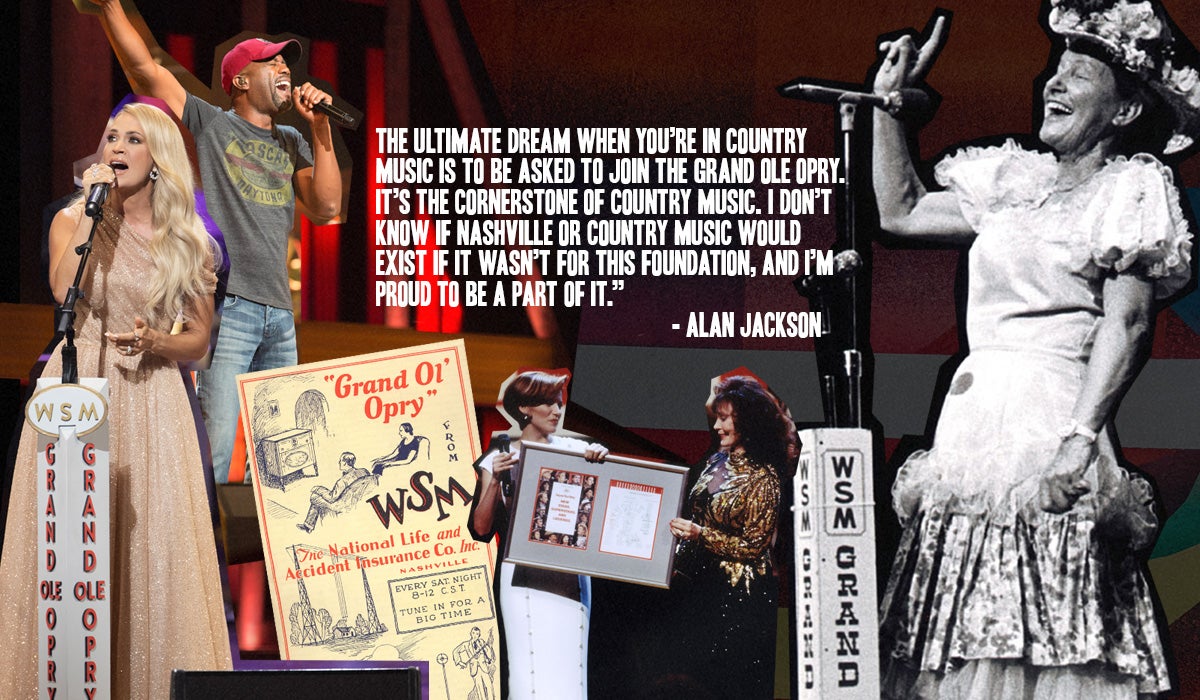 The Grand Ole Opry: The Show That Made Country Music Famous

From Philadelphia to Fiji, everyone knows the Grand Ole Opry is the show that made country music famous. How it earned that reputation is quite a tale.

It began on the night of Nov. 28, 1925, when an announcer on Nashville radio station WSM introduced fiddle player Uncle Jimmy Thompson as the first performer on a new show called “The WSM Barn Dance.” Now, more than 90 years later, the show Hay started is still going strong. Along the way, it has launched countless country music careers and led the way for Nashville to become Music City.

Early Opry performers such as Roy Acuff, Minnie Pearl, Ernest Tubb, and Bill Monroe became musical foundations for the Opry during its years in residence at the historic Ryman Auditorium, later welcoming to the stage artists who would become entertainment icons in their own right including Loretta Lynn, Dolly Parton, and Bill Anderson.

The Opry said goodbye to the Ryman Auditorium on Friday night, March 15, 1974. The next night, President Richard Nixon joined Roy Acuff on stage at the Grand Ole Opry House. Still, they could keep in touch with the traditions of the Ryman because a 6-foot circle of hardwood was taken from the Ryman and placed center stage at the Opry House.

Today the magic continues. Trace Adkins, Dierks Bentley, Vince Gill, Martina McBride, Brad Paisley, Ricky Skaggs, Marty Stuart, Mel Tillis, and Carrie Underwood are among the stars who are part of the Opry family. Thousands of people make pilgrimages every year to see and hear them, while millions tune in to enjoy the Grand Ole Opry via 650 WSM, Sirius XM Satellite Radio, syndicated radio, mobile apps or the website at opry.com.

“That was the most exciting moment of my life. As I stepped into the circle, I told everyone that my greatest dream just came true.”
—Dustin Lynch

“You think about people like Hank Williams, who stood on that spot of wood, and Mr. Acuff, and, of course, George Jones. And just about anybody you can think of who has made country music has been on that stage. That’s what makes you so nervous – to think about the historical part of the Opry and how it’s played such a part in country music.”

“The ultimate dream when you’re in country music is to be asked to join the Grand Ole Opry. It’s the cornerstone of country music. I don’t know if Nashville or country music would exist if it wasn’t for this foundation, and I’m proud to be a part of it.”
—Alan Jackson

“As a little boy, I used to listen to the Grand Ole Opry on the radio and dream of belonging. All other achievements pale in comparison and for the first time I feel like I really belong to the country music family. I’m so overwhelmed with the emotion of that little boy’s dream becoming reality.”
—Joe Diffie

“Until I started playing the Opry, I didn’t realize how powerful it is. The first time I played it I felt a real power – the power of heritage, of tradition, of the written word. It’s a great forum.”
—Hal Ketchum

“Becoming a member of the Grand Ole Opry is something I’ve wanted since I was a little girl.”
—Martina McBride

“My dad always said, ‘you know, no matter what awards you win, you haven’t made it until you get to play the Opry and you’re a part of the Opry.’”
—Eddie Montgomery

“You know, I don’t think if I played it a million times it would be any less special than the first time I played.”
—Chris Young

“When I was asked if I wanted to perform on the Grand Ole Opry, I yelled, ‘Are you kidding me?’ I’ve been waiting for that my whole life. To be invited where so many of the greatest country artists have performed is an honor, and I still can’t believe it has been bestowed on me. Just to stand in the circle where so many greats have stood—Hank Williams, Kitty Wells, I just couldn’t believe it.”
—Darius Rucker

“The Grand Ole Opry, to a country singer, is what Yankee Stadium is to a baseball player. Broadway to an actor. It’s the top of the ladder, the top of the mountain. You don’t just play the Opry; you
live it.”
—Bill Anderson

“I feel this is a family here, so kinda regardless of whatever happens in your life, you always can come home to the Grand Ole Opry, thank God.”
—Ronnie Milsap

“It’s such an honor. I still get, I guess, starstruck, at the Opry. Because there’s so much history here and there are so many legends that are still walking around backstage, so it’s really an incredible, incredible experience for somebody like me that grew up listening to all of them. And to be able to share the stage with them is something that I treasure.”
—Kellie Pickler 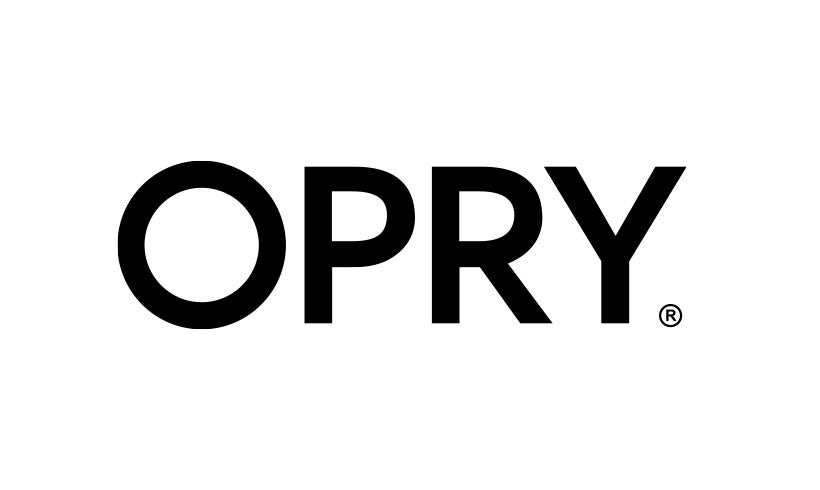 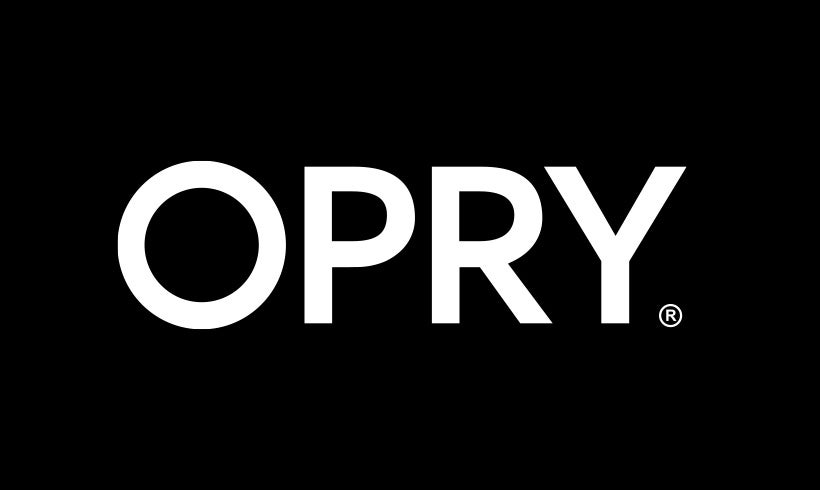 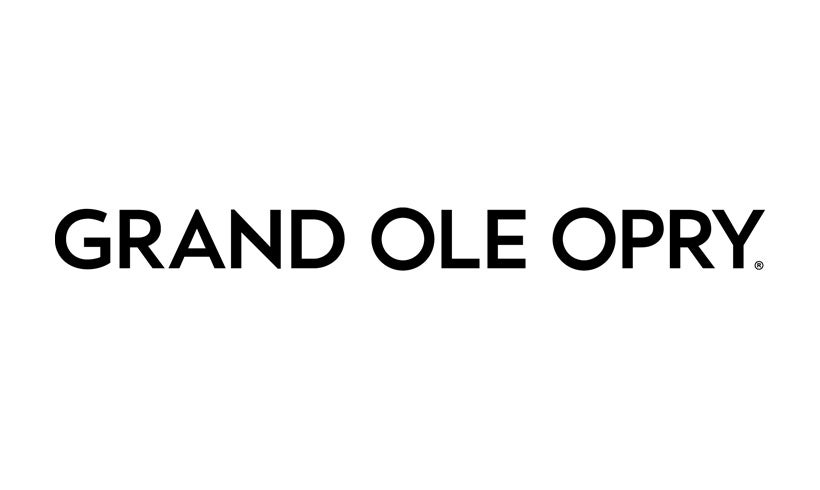 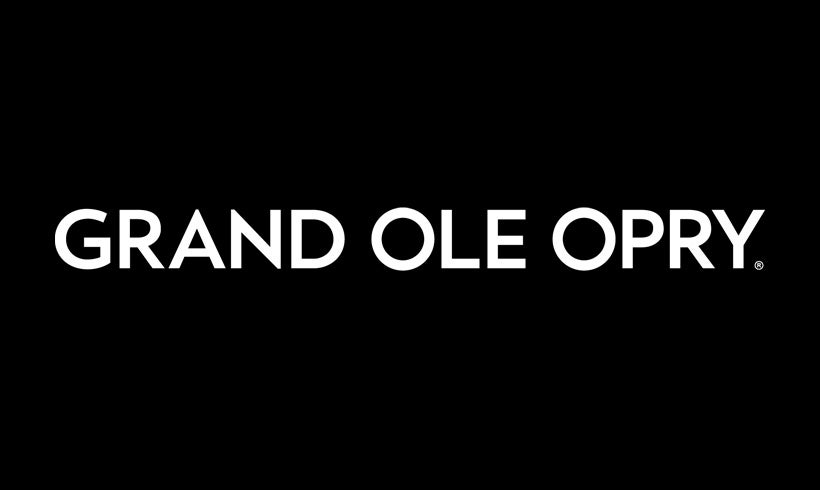 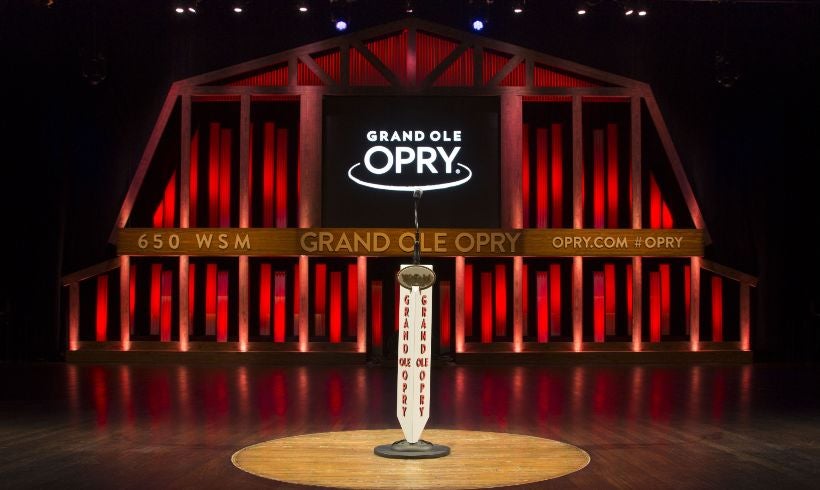 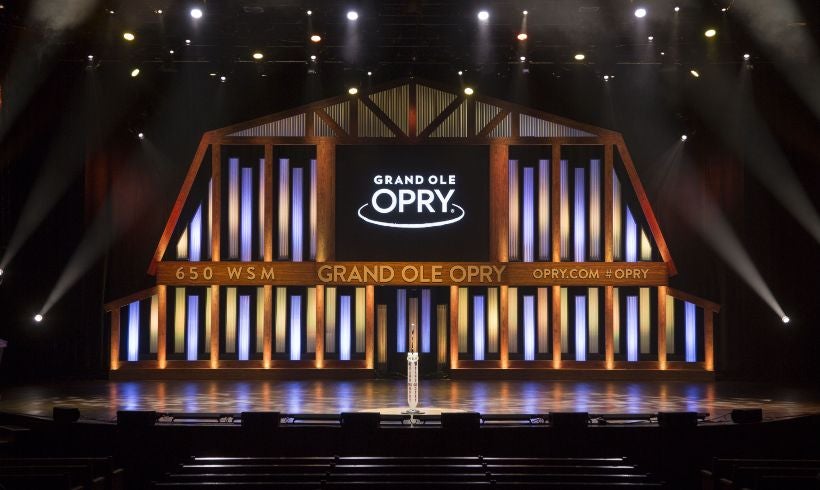 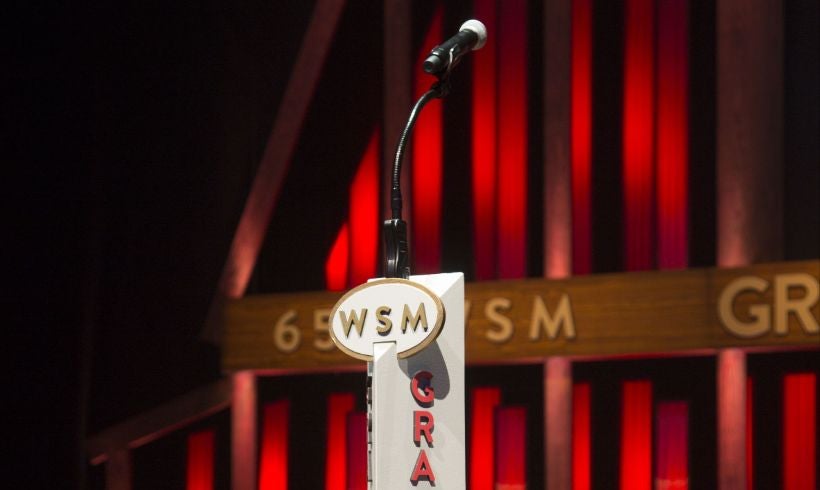 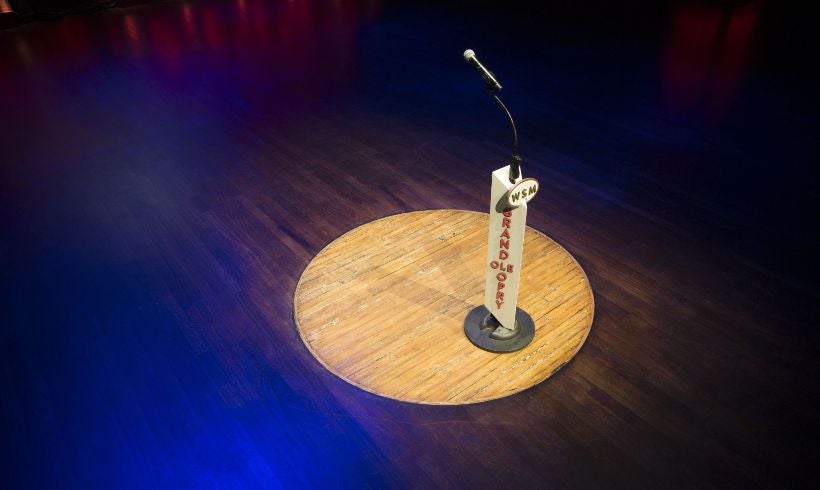 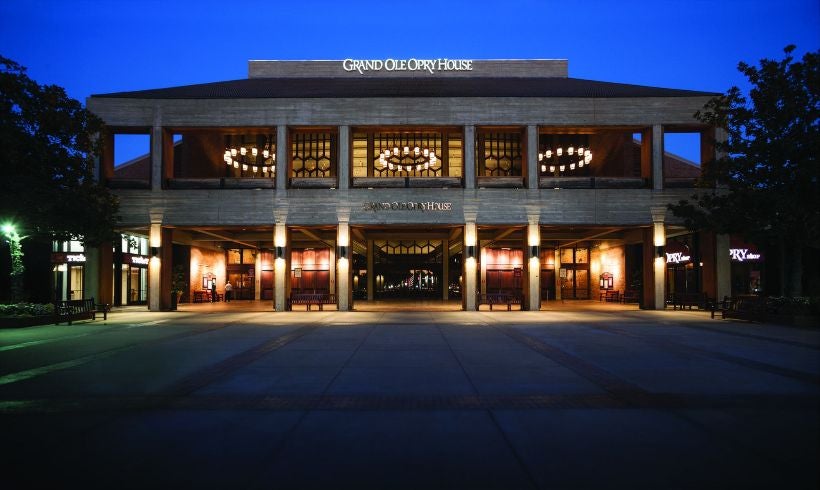 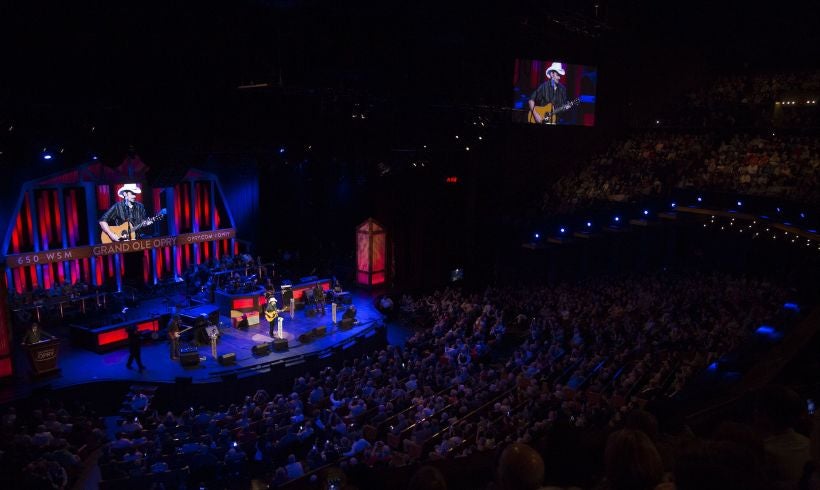 All photos copyright 2019 Grand Ole Opry®  All photos by Chris Hollo. Logos, videos, and photos are not to be used without express written permission.Please contact persons listed in the “Contacts” section below for assistance.