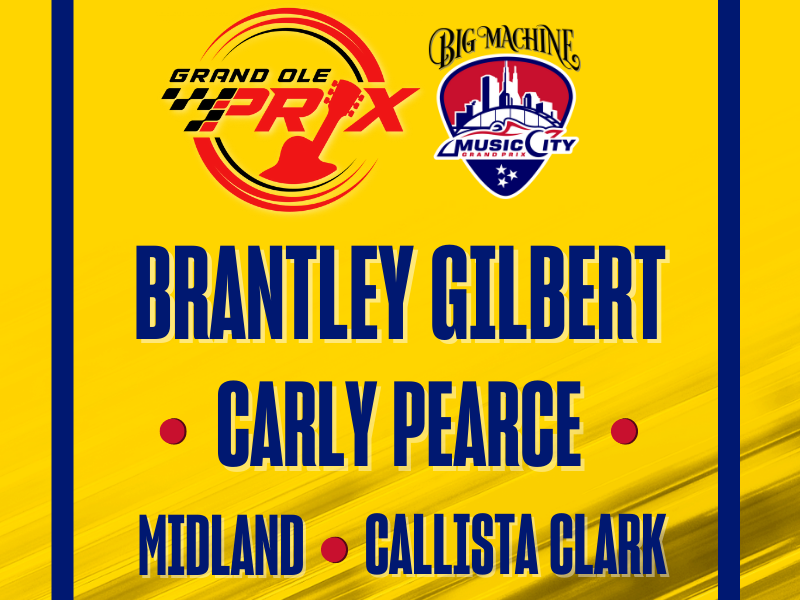 Fellow Big Machine Label Group artists Midland and Callista Clark will join Gilbert and Pearce during the special version of the esteemed show. Held outdoors in downtown Nashville as part of a second consecutive year merging racing and music, the live 90-minute show will begin at 5:45 p.m. CT on the ZYN Main Stage. The Grand Ole Prix follows the conclusion of the Big Machine Music City Grand Prix NTT INDYCAR SERIES race and culminates the Aug. 5-7 festivities in the heart of Music City.

Gilbert, who was previously named ACM New Male Vocalist of the Year (2012) and Top New Male Artist (2013), is a MULTI-PLATINUM-selling Georgia native with a grassroots following millions strong. Seven No. 1 hits punctuate his career: “Country Must be Country Wide,” “You Don’t Know Her Like I Do,” CMA Awards Song of the Year nominee “Dirt Road Anthem,” “My Kinda Party,” RIAA 5X PLATINUM-certified “Bottoms Up,” “One Hell of an Amen” and the collaboration with Lindsay Ell, “What Happens In A Small Town,” plus his landmark record JUST AS I AM clinched the 2014 American Music Award for Favorite Country Album. Following his “Rolex ® On A Redneck” collaboration with Jason Aldean, Gilbert partnered with Jelly Roll for their new song “Son Of The Dirty South.”

Reigning ACM/CMA Female Artist/Vocalist of the Year Pearce has enjoyed a recent wave of significant accolades as her “Never Wanted To Be That Girl” duet with Ashley McBryde became her second consecutive ACM Awards Music Event of the Year win and 29: Written in Stone was nominated for Album of the Year. The song also marked Pearce’s third No. 1 hit and they became only the third duet between two solo women to top Country Airplay since the Billboard chart’s 1990 inception. The Grand Ole Opry member will headline her first shows at the Ryman Auditorium on Oct. 26-27 after a summer touring with Kenny Chesney.

Rooted in tradition in both sound and style, Midland has grown from a bar band to an in-demand headliner selling out headline tours from coast to coast as well as supporting some of Country music’s biggest stars like George Strait, Garth Brooks, Tim McGraw and Little Big Town.

The 2018 ACM Awards New Vocal Group of the Year and GRAMMY®-nominated act offers an intentional nod to Country music reminiscent of the 1970s and ‘80s that has been evident since their 2X PLATINUM-certified No. 1 “Drinkin’ Problem” and is reflected on their latest single, “Longneck Way To Go" featuring Jon Pardi.

Named to Billboard’s annual “21 Under 21” list for two consecutive years and CMT’s 2022 class of Next Women of Country, 18-year-old Clark has a lot to say, wielding her creative gifts as both a defense and an instrument of peace as she puts her heart on display. With Real To Me producing the Top 20 “It’s ‘Cause I Am,” she became Country radio’s most successful new artist debut of 2021. Her latest single, “Gave It Back Broken,” is featured on her forthcoming debut album REAL TO ME: THE WAY I FEEL, arriving Oct. 14.

Three-day tickets and premium packages currently on sale provide admission to all on-track activities featuring the NTT INDYCAR SERIES and each of the concerts. Three-day tickets begin as low as $129 for general admission and $209 and $219 for reserved grandstand. Visit www.musiccitygp.com/tickets for more information or to purchase now.

About the Grand Ole Opry: Opry presents the best in country music live every week from Nashville, Tenn.  The Opry can be heard at opry.com and wsmonline.com, Opry and WSM mobile apps, SiriusXM, and its flagship home, 650 AM-WSM, with Saturday night shows seen on the Circle Network. The Grand Ole Opry is owned by Ryman Hospitality Properties (NYSE: RHP).  For more information, visit opry.com.