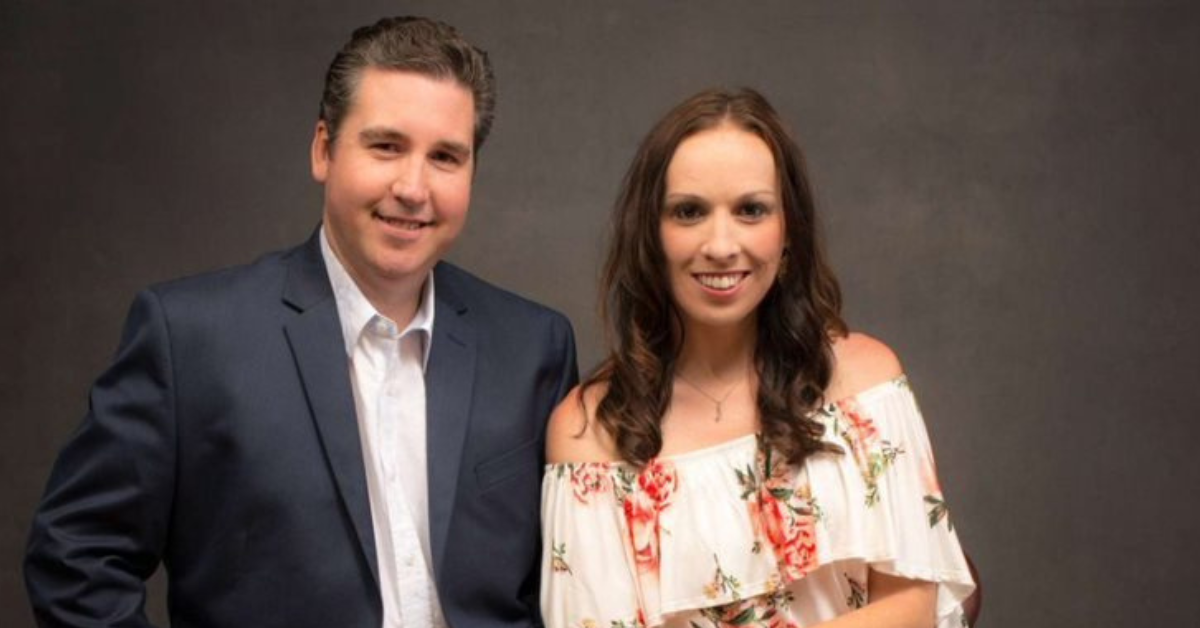 Their families both hail from Avery County, NC, which is deep in the heart of the Blue Ridge Mountains. Darin grew up in the Piedmont town of Cherryville.

“I’ve known that I was going to do music for a long time,” he reports. “My brother had a rock band, and The Beach Boys really caught my ear with their singing. I can remember going down to our basement as a child, just looking at instruments and sound equipment.

“There were always musicians around. My grandpa sang, and he was on the radio a good bit. My uncle was in a gospel group that sang professionally, The Melody Trio.

“But Vince Gill was probably my biggest influence. I’ve looked up to him ever since I picked up a guitar. When my first band got established, I was probably just 16.”

Darin Aldridge left the Tarheel State to tour with the star bluegrass band The Country Gentlemen in 1999-2005. But he found his life’s companion back at home. He met Brooke Justice in 2005. By then, she’d been crowned a champion in more than 30 vocal contests.

“I learned singing from my mom and her side of the family,” says Brooke. “On weekends, they’d sit around and sing a cappella. When I was a kid, both Mom and Dad recognized that I caught onto lyrics really quickly.

“I grew up singing a lot in church. Gospel and country music were instilled in me at a very young age. From elementary school all the way up through the eighth grade I was in talent competitions,” singing the songs of Tanya Tucker, Pam Tillis, Carlene Carter and, especially, Emmylou Harris, Brooke’s biggest influence.

When she was 15, a friend gave her an album by Rhonda Vincent, and Brooke became a bluegrass convert.

“The church she went to, my third cousin was the preacher,” recalls Darin. “One of my favorite aunts went to church there, and she was real close to my mom. They talked a lot about Brooke and her singing voice.

“I was with The Country Gentlemen at the time. I travelled a bunch. But people kept telling me about her, saying, ‘She’d be perfect for you.’ And she heard the same about me.”

After corresponding for about a year, they began harmonizing at her church, singing “Precious Jesus” and “Drifting Too Far From the Shore.” They teamed up professionally and married in 2008.

Six years her husband’s junior, Brooke was a novice at the time: “When we first started working together, Darin said, ‘How serious are you about this? Because it is a lot of hard work.’

“That’s the side of it that I didn’t realize. I didn’t have any clue about what there was to having a music career.”

Those records have brought the couple accolades from the International Bluegrass Music Association, Darin as a Mentor honoree and Brooke as the IBMA’s Female Vocalist of the Year in 2017-18. Their extraordinary voices have led to over 22 appearances to perform on the Grand Ole Opry over the past two years.

“We want our music to lift people up,” Brooke offers. “It was an early goal of ours to put a positive message out there,” adds Darin. “And we decided a long, long time ago, that we were going to be US, no matter what.”

What ultimately makes their partnership work is that they have absolute and total respect for one another. This is evident in everything that they do.

“We’re a good fit for each other,” observes Darin Aldridge. “Looking back, I think it was just meant to be,” says Brooke Aldridge.