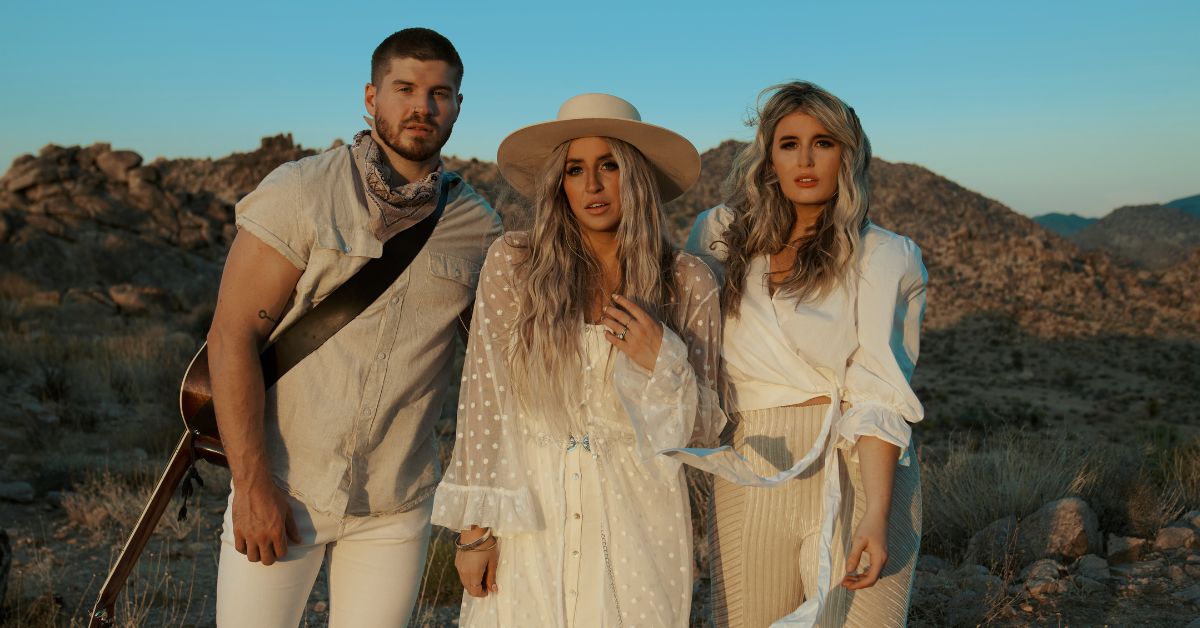 Spend five minutes with the members of CAIN and you’ll feel like you’ve spent the afternoon in the sunshine. The band’s effervescent joy spills over onto each person they meet, their bright smiles as contagious as their
chill-inducing harmonies. Pouring their perpetual joy into their debut album, 2021’s Rise Up, CAIN - made up of siblings Madison Cain Johnson, Taylor Cain Matz, and Logan Cain - has discovered what it’s like to live their calling while doing their favorite thing, singing about Jesus.

Making it to their Rise Up debut didn’t come easily or quickly. Raised in Alabama the kids of pastors, CAIN developed a love for music from an early age. By elementary school, they were integrated into the church service, playing and singing side-by-side, but never pursued music in a serious way. When a college friend alerted them to a contest hosted by Dave Barnes, the prize an opening slot at the Workplay Theater in Birmingham, they quickly worked up a cover of Whitney Houston’s “I Wanna Dance With Somebody” and shot a video. Over an eight-week period, the trio kept advancing to the next round, entering more cover songs and videos, until they finally won. “We found out we had to do original songs for the show,“ Taylor says with a laugh. “We didn’t have a band name, didn’t have any merch, didn’t know how to write a song. We were totally unprepared.”

Their grandfather, who worked in country music publishing, saw their performance and offered to help them make some connections in the industry. They’d grown up fans of both Christian and country music and jumped at the chance. For five years, they worked hard in the country music scene, learning the art of songwriting and how to live on the road. They had some hints of success, a song made it onto Sirius XM’s The Highway and they got the opportunity to play a CMA stage, but nothing concrete clicked into place. After some game-changing setbacks, CAIN decided to take a break from pursuing music, a decision that held more emotion than just a break from music. The trio grew up extremely close and the idea of being separated was more worrisome than giving up music. “I’d heard of people who operated that way,” Logan shares, “siblings living far apart. But the three of us shared a room until we were old enough to not. We shared an apartment in college. We’d never been apart.”

CAIN stayed in Nashville and plugged into their local church, joining the worship team, content for that to be their sole outlet for music. “We were settled for the first time in a long time,” Taylor says. “We were at peace.” When a man in their church, their now manager Ron Smith, approached them about possibly pursuing Christian music, it felt like an overwhelming possibility. “CCM was all I knew growing up,” Logan says. “I was raised on Third Day and Steven Curtis Chapman. But when the opportunity came up, we were afraid to start over..”

CAIN decided to follow through and holed up at Madison’s house to try and write a Christian song. Right away, it opened their eyes to what could be. “I used to think writing Christian music would be limiting because you could only write about certain things,” Madison says. “But really, it cracked us right open, we had our whole lives to draw from.” The band wrote three new songs and, with Ron’s help, booked a couple of meetings in town. Provident Label Group loved what they heard and offered CAIN a record deal. After signing, CAIN kept working on their craft and by the next meeting had written “Rise Up (Lazarus),” “Yes He Can” and “The Commission,” three songs that became the backbone of their debut album, Rise Up.

After signing with Provident, the band was able to pour their heart and soul into making the kind of music they’d always wanted to make. CAIN’s signature harmony-based, country-laced melodies are energetic joy bombs, and their songs aren’t forced platitudes but genuine, from-the-heart happiness lived by the band. When asked where all that joy comes from, all three siblings light up like sunbeams. “We’re not using happiness as wallpaper to cover the hole in the wall,” Logan says. “We’re saying if you’re not happy now, there’s happiness on the way.”

“Rise Up (Lazarus),” the band’s first single, went No.1 at Christian radio for multiple weeks and also won the 2021 K-LOVE Fan Award for “Breakout Single of the Year” for good reason. Its country-leaning, worship-fueled, family-magic-harmonies have the listener singing along halfway through the first chorus.

Their second single also hit No. 1 for numerous weeks, “Yes He Can,” a smile in a pop song and might be the truest to who CAIN is, both as a band and as individuals. It’s a full-flung belief in a God who’s done it and can do it again, a yes to everything the band has been through and everything they hope to accomplish. The music video, conceptualized and styled by the band, is the song brought to life, cheering on people in everyday situations who need encouragement to take the next step. It’s perhaps the overarching theme for CAIN - a bright belief in a God who can do anything for you, who wants to do it, who has done it. “Mountains come in all types of sizes,” Logan says. “God still cares about your mountain no matter how big or small it is.”

Fast forward to today with more than 150 million music streams and being named by Billboard, BDS, and Mediabase as the Most Played Artist on Christian radio. Also, add American Music Award (Favorite Inspirational Artist) and GMA Dove Award (Best New Artist) nominations along with their K-LOVE Fan Award win and other nominations. They also released their first Christmas EP Wonderful (in 2021) which offers duets with industry legends Steven Curtis Chapman and Mac Powell, the project also made American Songwriter’s “not to miss” top 15 holiday albums for the season.

Now with touring back in full swing, CAIN has been loving the numerous opportunities to share their songs live. To date they have toured with Zach Williams, We The Kingdom, Casting Crowns, TobyMac, and Matthew West. More dates are to come for the rest of the year and into 2023, especially with their growing families - each of the members of CAIN has had a baby within this past year!

Hearing their songs live, in the car, or at home, listeners will be blessed by the songs of CAIN - music made of hard-won hope that radiates the kind of eternal happiness only found in the goodness of God.