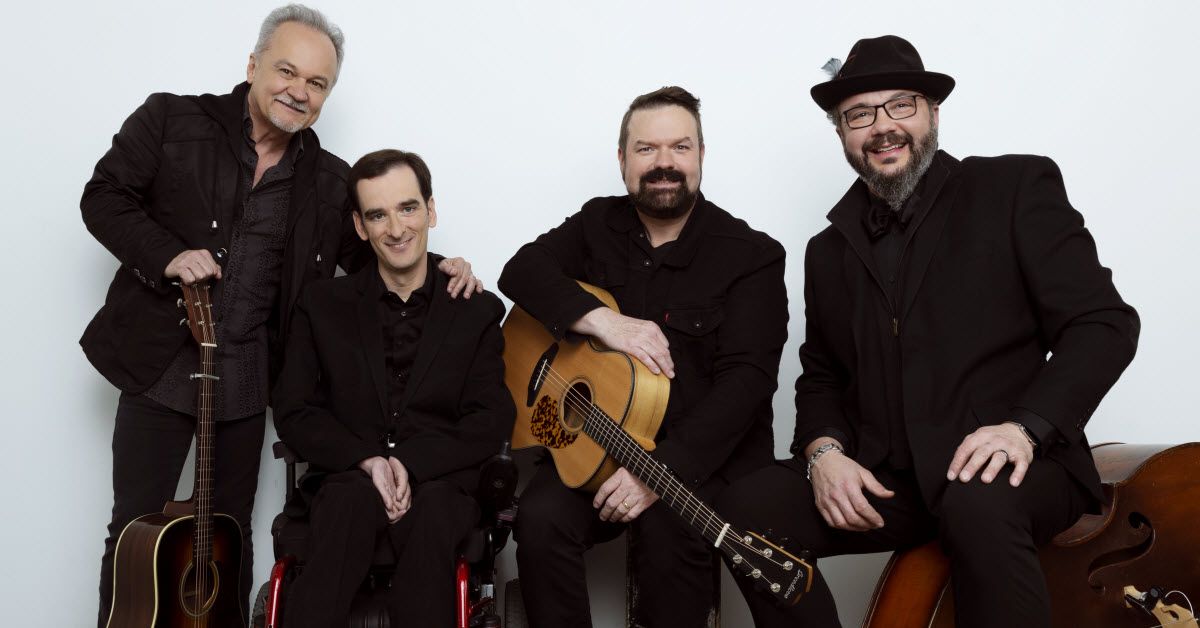 Everyone has heard the old adage two heads are better than one and three are better than two, touting the obvious benefits of collaboration and the way it always raises the stakes exponentially. So combining the talents of four world-class artists was a sure bet the results would be something truly inspired and unique. With one listen to Brotherly Love, it’s obviously true. Jimmy Fortune, Bradley Walker, Mike Rogers and Ben Isaacs have joined forces to record a stellar album/video that showcases each artist’s widely-acknowledged individual gifts and spotlights their incredible musical chemistry.

“When Ben called me and asked what would I think about doing a project like this—and he mentioned all four of us together—who wouldn’t want to do that?” Walker says with a smile. “I’ve known all these guys through their music careers and been a fan of what they’ve done for many years, so immediately I knew I wanted to be a part of it.”

Rogers agrees. “I’ve looked up to Jimmy, Ben and Bradley for a long time; and to get to sing and spend time with them is amazing,” he says. “There’s just so much love when we are in the room together. We can laugh. We can cut up. We can cry.”

Each member of the group brings a wealth of experience to the Gaither Music Group project. Fortune rose to fame as a member of the Statler Brothers and penned some of their biggest hits (“Elizabeth,” “Too Much on My Heart”) before forging a successful solo career when the quartet retired. Walker is a DOVE Award-winning artist with a strong following in country, gospel and bluegrass. Isaacs has performed with his mother and sisters for years as the GRAMMY-nominated group The Isaacs.  Formerly with the legendary Doyle Lawson & Quicksilver, Rogers is one of the most highly respected musicians in bluegrass music.

Each member brings their intriguing amalgam of experiences and influences to Brotherly Love. The result is a diverse collection that spotlights some of the best-loved gems on America’s musical landscape. Walker takes lead on the mournful Hank Williams Sr. classic “I’m So Lonesome I Could Cry.” Fortune’s pristine tenor shines on the Vince Gill hit “Go Rest High on That Mountain.” Rogers delivers a spirited take on the O Brother, Where Art Thou hit “Man of Constant Sorrow”; and Isaacs’ warm voice revives the Don Williams’ hit “Lord, I Hope This Day Is Good.”

Their friendship and camaraderie shine on the title track, “Brotherly Love,” a country hit for the late Keith Whitley and Earl Thomas Conley. The album also features the Statler Brothers’ classic “The Class of ’57” and Roy Orbison’s “Crying” as well as such gospel standards as “The Lighthouse,” “Daddy Sang Bass” and “Where No One Stands Alone.”

The seeds for this unique project were sown when Isaacs and Rogers began playing around Nashville just for fun.  “First of all, I think it is a God thing,” Isaacs says of how the foursome originated. “Mike and I had sang on Jimmy’s records and we’ve sang on Bradley’s records, but we were playing downtown and [Gaither Music Group’s] Barry Jennings came and watched us play. He said, ‘This is too good for people not to hear.’ So he asked if we would be willing to do it with Jimmy and Bradley; and I said, ‘Absolutely.’ We got together, and when we sang for the first time it was magical. Together the blend and the love we have for each other was so strong that I felt like it had to be shared.”

During their first meeting to discuss songs, the foursome sang together for two hours and enjoyed every minute of it. “It was so much fun,” Fortune says. “First of all, I’m a big fan of Mike Rogers, Bradley Walker and Ben Isaacs and all The Isaacs. I’m their biggest fan. I know people always say that, but I am. These guys are some of the best in the business. I mean that with all my heart, and I don’t think anybody will argue with that. I’m just honored to be part of this. There’s not much we couldn’t cover as far as any genre of music. It’s pretty special.”

A 12-time GRAMMY-nominated producer who has shepherded many of the top names in the industry, Isaacs produced Brotherly Love. “For me, it was a given that Jimmy sing ‘Go Rest High’ because there’s no one who is going to sing that with more heart than Jimmy Fortune,” Isaacs says.  “It was a given that Bradley would sing ‘The Lighthouse’ and that Mike would sing ‘Man of Constant Sorrow.’ He does so good with those energy things. It was, ‘Here’s our favorite songs,’ and it was more about whatever song fit the personality.”

As Isaacs says, Mike Rogers definitely has a way with an up-tempo number; and he delivers a swinging rendition of the George Jones’ classic “Love Bug.” “That’s one of the songs we did downtown--Ben and myself,” Rogers says. “I called it out one night and Ben goes, ‘Hey, Mikey, let’s swing it up a little bit’ because that song has a little different groove than the way George Jones did it and the way George Strait did it.  Ben wanted to put more of a swingy feel to it. I’ve always said, ‘Ben, if we ever get a chance to cut this song, it would be awesome to do it like this because I’ve never heard it done that way.’  So we did it. It is just so much fun to sing and play with the guys, and it shows off that talented band we had. It was just awesome to do that, and then to bring the quartet in on the choruses was even cooler.”

One of the most soulful moments on the album is Fortune’s rendition of the chart-topping 1979 J.D. Souther hit “You’re Only Lonely.” Fortune credits the late Chuck Dauphin for suggesting he record the song. “He did so much for me and my solo career,” Fortune says of the award-winning journalist, who passed away in 2019. “We were getting ready to do this project, and I got a call from Chuck. He said, ‘Man, you were telling me about working with Ben Isaacs, Bradley Walker and Mike Rogers on this new project. Me and some of my friends were talking, and we would love to hear you do “You’re Only Lonely” from JD Souther.’ I said, ‘My gosh, that’s funny you said that because that song has been on my mind.’ A while later I called Chuck to tell him we recorded it, but he died before he got to hear it.  I miss him so much but I’ve got a feeling he hears it. I loved him so much. He did so much for so many. He was a great writer and a good man.”

One of the moments that gave everybody chills was Walker’s cover of “I’m So Lonesome I Could Cry.” “When you hear a voice that has been soaked in heart and soul that’s Bradley Walker’s voice,” Fortune says. “Bradley singing ‘I’m So Lonesome I Could Cry’ is the best I’ve ever heard it done. I’m not even singing on that and it’s my favorite song on the whole album. Man, it’s so stinkin’ good!  When you hear the blend that comes in with Mike and Ben singing with Bradley on the harmonies, it’s just incredible. It’s a great cut on one of the greatest songs ever written.”

Isaacs, Fortune and Rogers have all spent time performing in successful groups; but for Walker this was a new experience. “This is really my first time to be able to record an album as part of a group. Almost everything I’ve ever done has been as a solo artist, singing lead,” says Walker, who won the 2018 DOVE Award for Bluegrass/Country/Roots Album. “I feel so blessed just to be a part of this and that these three guys would think enough of me to say, ‘Hey, we want you to be a part of this with us’ because you are talking about three of the best in the business that there will ever be. It’s really a huge blessing for me to be able to experience this with all of these guys.”

For Isaacs, performing as part of a male quartet was a new experience as he has performed with his mother, Lily, and sisters, Becky and Sonya, for years. “It’s completely different,” he says.  “I have been very blessed to sing on a lot of records and sing harmonies with guys on a lot of records. Mike is the same way, but when we sing a note like the end of ‘The Lighthouse’ or ‘Where No One Stands Alone’ or ‘Crying’—especially the last two notes on ‘Crying’—when we hit those notes and I am in the middle of being a part of that wall of sound in a different way from what I’m used to hearing, it excites me. It’s a completely different tone and it’s so enjoyable and so easy.  When I’m singing with Sonya and Becky I’m having to sing so much higher and push harder.  Because Jimmy and Mike sing so much higher than I do, I’m really, really enjoying just laying back and blending. It’s the funnest thing in the world.”

In addition to recording the album, the foursome also filmed a concert video at Rory Feek’s barn that will be featured as a television special on multiple networks. The award-winning singer/songwriter Feek conducted behind-the-scenes interviews with the group members as well as Bill Gaither and hosted the DVD, which captures special, in-the-round performances of the songs on the album, plus two bonus songs—“Elizabeth” and “I’ll Fly Away.”  “That night there was so much energy in the room and the crowd was involved. It just felt so good,” Rogers says. “The energy was just so incredible, and to sing on stage in the round like we did--it was just amazing. It was one of the coolest, if not the coolest, nights that I’ve ever been a part of ever in my whole time of playing music.”

Sitting in the audience was a Who’s Who of country and gospel legends, including Linda Davis; Sonya, Becky and Lily Isaacs; the Booth Brothers; Jimmy Capps and The Martins. “We could feel the support from those people in that room that night because the people that were there are our friends and family, and they are people that we look up to as singers and musicians. That really enhanced the night,” Walker says. “It made it extra special, and I want to give kudos to Ben for having the vision to do that in the round because that was all his idea to have us in the center of the room with people all around us. I’ve never done a show like that before, and that configuration was the perfect thing to do for a project like this, and that was all Ben.”

This project not only showcases great songs brought to life once again through amazing performances, it also celebrates the bonds of true friendship. “If ever we needed brotherly love we sure need it in the world today towards one another,” Fortune says. “We need to look at each other with the love of real brotherhood. We’re all in this together. No matter what our differences are, we have more in common than we think we do, and that is love for one another. That’s what this whole project is all about, and that’s why we wanted to call it Brotherly Love.”